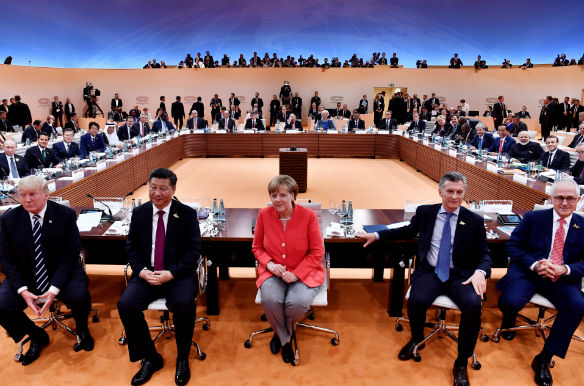 The Group of Twenty (G20), the premier organization for cooperation among the world’s most powerful countries—according to the size of their economies, population, and many other indicators—will hold its thirteenth summit in Argentina in 2018.

While the G20 lacks a secretariat and a permanent administrative body, it has a set of comprehensive values, codes, and policy manuals that allow the organization to function successfully. The issues that have been on the summit agenda since 2008 are still extremely relevant, as they are a part of the G20’s core principles, and every year leaders make new and valuable contributions. These issues include: the functioning and supervision of the international financial system, tax evasion and havens, terrorist financing, money laundering, and information sharing. However, since these issues are already integrated into the G20 agenda, and will continue to be addressed at annual summits, Argentina should set its objectives on other policy areas.

At almost every summit outside those held during the financial crisis, G20 hosts have established a motto or motivational phrase. In Hamburg last year, the motto was “shaping an interconnected world.” This gave rise to the German G20 presidency’s focus on the digital economy, the advantages of digitalization, and the concrete possibility of achieving an interconnected global population by 2025. A second theme focused on the development of sub-Saharan Africa and the potential of youth employment in rural and urban communities. A third theme centered on the relationship between climate change, energy, and the Environmental Goods Agreement (EGA). At other summits, with different illustrative mottos, member countries agreed to review policies and plans of action with the aim of achieving greater economic growth and employment, particularly for groups such as youth, women, and lower skilled workers.

This year’s summit, in Buenos Aires, will be an important opportunity for Argentina to embody a more egalitarian view of development and show itself as a modern developing country eager to work with the rest of the world to tackle global governance challenges. In the current context of international uncertainty, Argentina will try to work as an intermediary between different major G20 countries, facilitating discussions to reach common ground. Essentially, it will have to focus on ensuring that member countries continue working together.

A Possible Agenda for the Argentinean Presidency

Until now, there has not been a search for consensus on how to confront a disruptive and rapid phenomenon: the “fourth industrial revolution.” This is particularly compelling at the international level because of the challenge populism currently presents in some developed countries and increasing awareness of the potential harmful consequences of automation.

Though many refer to this phenomenon as the fourth industrial revolution, it must be differentiated from those of the past. It not only modifies what we do, but also who we are—it is a fundamental shift from the past. Within this revolution, artificial intelligence, automation, 3-D printing, and the internet converge. It is important to consider how these processes affect not only the global economy, but also labor and job markets, the characteristics of employment, the labor-capital relationship, and education and training. Data shows that the latter will stop only being phases in people’s lives and transform into a more permanent, continuous development. According to a study by the McKinsey Global Institute, 140 million workers will be affected worldwide by technology changes. Another study from the software firm Intuit predicts that in 2020, 40 percent of American workers will be independent contractors due to the effects of automation on the labor market.

Another change in the global economy is the growth of companies that do not possess tangible assets, yet have greater market value than traditional firms in the same sector. Airbnb, for instance, owns no hotels or lodgings but is still valued higher than the five biggest global hotel chains combined. There are many similar cases: Uber does not own any cars, Amazon works with no stocks, and Facebook is the biggest content producer with no content creators. These firms and others in the on-demand or gig economy work with temporary contracts, in which hires are independent contractors whose only compensation is a fixed payment. Furthermore, hiring from a distance and outsourcing are common.

Therefore, it is essential that the Argentine G20 plan of action includes policies that increase protection for workers in this new economy. A first step will be to create an agenda that prioritizes labor rights and protections. A twenty-first century worker might have several jobs for limited periods of time—this is common, for example, in the construction sector. However, in the future, these jobs could be across several sectors, requiring different skills for multiple employers. There is also now the real possibility that people could make full-time occupations out of part-time or irregular jobs. We now face the challenge of designing new protections for such workers.

This objective should focus on attaining wide support for creating a permanent observatory to measure the impact of new technologies on employment, and identify the different categories of workers and new activities that will arise as a consequence of these new technologies. This observatory should place special attention on the evolution of temporary and permanent employment, income levels, and new ways of hiring. It should also analyze the evolution of women in the labor market and as entrepreneurs. Learning about the impact new technologies have on the labor market and the disappearance and creation of new labor activities will be crucial to anticipate possible future scenarios. While there have been many studies regarding the evolution of the labor market in various sectors’ tendencies, none draw connections to technological changes. The observatory’s research methodology and report drafting should be carried out by the Organization for Economic Cooperation and Development with the collaboration of the International Labor Organization and the United Nations.

A second policy should be the creation of a similar tax base for companies with mainly intangible assets and companies that hire employees for specific tasks. This will help avoid the base erosion and profit shifting (BEPS) to which nations are so prone. The G20 has proposed similar initiatives in the past, including the BEPS Action Plan endorsed by leaders at the 2013 G20 summit in Saint Petersburg. The very nature of these companies creates tax problems that will continue until new ways of control emerge through better management of big data.

A plan could simultaneously take advantage of powerful data processing for operational follow-up with compiling and tracking data. Having said this, caution should be taken to not chase away entrepreneurs, start-ups, and existing innovators, since they are the key to future development.

Additional policies should address education and training. Building on the work of previous summits, this could consist of promoting increased cooperation and action through better information sharing of best practices between countries. That being said, it is important to bear in mind the structural differences between regions and countries. It is fundamentally important to place this topic on the agenda because it highlights the importance of teachers’ learning, social recognition, revalidation of knowledge, and the ability to lead and create.

The fourth revolution is modifying human behavior and, therefore, education should adapt. Training must also change to not necessarily be located in the workplace, but rather could be implemented from home or authorized locations selected by local governments. Traditional education will continue, but unconventional education and training types will be indispensable when some jobs and professions are eliminated and the need arises to find new activities and skills for those workers. This process is already happening and will occur more rapidly in five to ten years. Given the likelihood that working-age men and women will participate in temporal labor during periods of unemployment, efforts should be deployed toward design, arts, and leisure activities. Education is a central issue, since children currently in elementary school will experience all the technological changes we are now discussing.

A fourth focus for the plan of action should be on gender equality. An important step forward would be to develop a work plan that, apart from seeking to raise the participation rate of women in the labor market to 25 percent and supporting their entrepreneurial abilities, takes into account that 80 percent of women’s income goes to family consumption, compared to only 40 percent for men. This contributes to families getting out of poverty. While the Business 20 and the Women 20, the official G20 dialogues for the global business community and reducing the gender employment gap respectively, already support such objectives, it would be convenient to pursue these with the support of a new group that could be named the Improving Gender Equality Working Group and the already established Global Partnership for Financial Inclusion.

Ultimately, the Argentinian G20 presidency must not only take into consideration the regular issues and debates that have been on previous summit agendas, but also focus debate on labor, technological disruption, and gender equality. Additionally, the G20 must take into consideration education issues, given the fact that without structural changes in education there is little hope for successfully coping with these new challenges.

More from the Council of Councils
A Region Divided: What Did the Summit of the Americas Accomplish?
Russia’s Invasion of Ukraine Will Have Lasting Implications
COVID-19 After Two Years: The Failure of Pandemic Governance
Drag