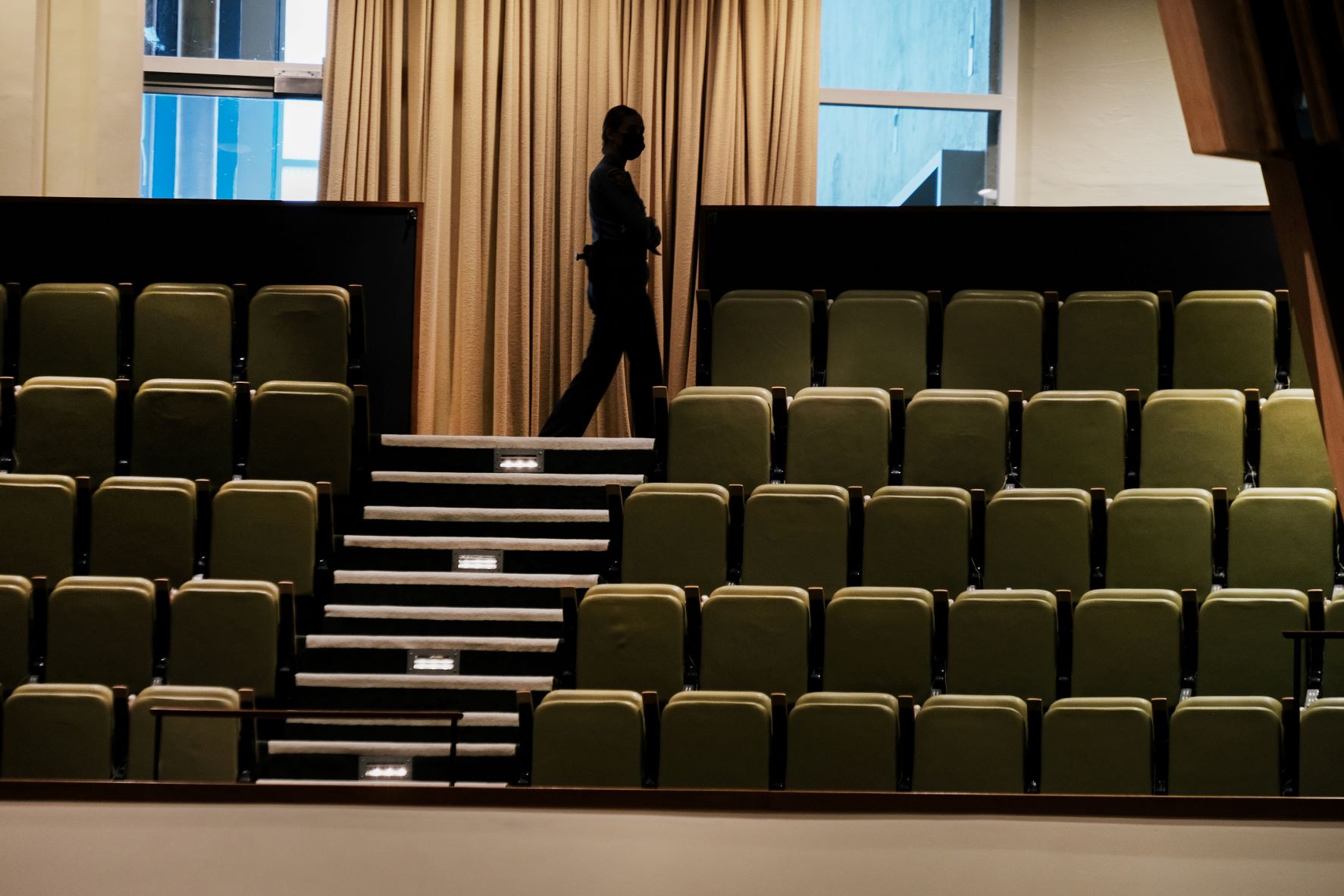 The COVID-19 pandemic has delayed global summits and undermined the ability of leaders to act on issues that imperil the safety, security, and well-being of every nation’s citizens, including climate change, biodiversity loss, intellectual property rules, and nuclear risks. The unprecedented joint health and economic crisis is also exacerbating divisions between developing and developed countries amid an increasingly polarized U.S.-China rivalry and escalating Russian aggression.

Despite some mild successes, countries made insufficient progress in their 2021 summitry. Several new national leaders and country hosts will be setting the agendas for the first time in 2022. Still, it is unclear whether they will be any more successful than their predecessors were. Here are ten summits set for 2022, where fresh faces will step onto the stage and long-delayed meetings could prove fruitful.

The repeated rescheduling of the twelfth World Trade Organization (WTO) Ministerial Conference (MC12)—it was postponed twice last year because of COVID-19—reflects the current dysfunction of the WTO. Ministerials generally occur every two years, but by March it will have been five years since the last conference, leaving Director General Ngozi Okonjo-Iweala’s first ministerial with a long list of agenda items. Okonjo-Iweala has called on members to conclude agreements on the WTO’s response to the pandemic—including a proposal to waive intellectual property rights for COVID-19 vaccines and treatments—and on fisheries subsidies by the end of February 2022. The outcome of these negotiations remains uncertain due to disagreements mostly between developed and developing countries. Discord between the developed and developing world on trade rules and a trend toward more discriminatory and protectionist measures will most likely hamper major progress at MC12. However, gains could come in the form of plurilateral agreements in areas such as e-commerce, investment facilitation, and services regulation.

The hybrid gathering in Kunming will build on progress made during part one of the fifteenth Conference of the Parties (COP15) to the UN convention, which was held virtually in October 2021 and resulted in the Kunming Declaration and the Kunming Biodiversity Fund. The October session focused on negotiating draft language for the Post-2020 Global Biodiversity Framework [PDF], which establishes targets to address critical elements of biodiversity loss and preservation by 2030. The main objective of this second part of the conference will be to adopt such a framework. The need for immediate action on biodiversity loss has never been more urgent. According to UN Secretary-General Antonio Guterres, humanity is “losing [its] suicidal war against nature,” with extinction rates reaching unprecedented levels. Humanity is also beginning to reap what it has sown, with the pandemic underscoring the harsh consequences of the destruction of nature.

The United States will host the ninth Summit of the Americas, its first time playing host since the inaugural meeting in 1994. President Joe Biden will invite thirty-four other heads of state and government for this triennial gathering of the leaders of all the countries of Central, North, and South America and the Caribbean. The United States is expected to propose a new regional policy on “more humane border management” for all American and Caribbean countries. The plan comes at a time when historic numbers of people are migrating across the continents due to failing states, limited economic opportunities, crime, violence, and now the pandemic. Long used as a summit for Latin America to push back against the United States, it now serves as a chance for Biden to strengthen regional ties, especially after U.S. President Donald Trump canceled his trip to Peru for the last summit in 2018. Improved relations and increased cooperation across the Americas will be crucial for addressing U.S. policies on immigration, climate, and democracy.

Germany’s leadership will for the first time since 2005 host a major summit without former Chancellor Angela Merkel, who stepped down late last year. Foreign Minister Annalena Baerbock has called on the Group of Seven (G7) to act resolutely rather than react, and will focus Germany’s presidency on three main pillars: expanding commitments to climate mitigation, strengthening multilateralism, and increasing the resiliency of democracies. Other issues that could be discussed include: recent Russian aggression in Ukraine as well as Chinese aggression in the Indo-Pacific, balancing global developmental goals with environmental concerns, expanding G7 membership, rising inflation rates, and the COVID-19 pandemic. Chancellor Olaf Scholz’s first New Year’s address made clear that the G7’s top priority will be climate change, including better understanding the links between climate and security. Germany will continue the recent tradition of inviting guests with “shared values of freedom and the rule of law,” with early ministerial meetings including African nations and subsequent gatherings including countries from the Pacific region.

During his visit with Spanish Prime Minister Pedro Sanchez to discuss the summit, North Atlantic Treaty Organization (NATO) Secretary-General Jens Stoltenberg stated that the alliance has to “keep adapting for the future;” however, recent events near NATO’s eastern border dictate that it will also have to contend with historic tensions this year. At the summit, NATO leaders are expected to endorse the 2022 Strategic Concept, which will focus on five elements: protecting NATO values, reinforcing the alliance’s military power, strengthening NATO societies, pursuing a global outlook, and making NATO the “institutional link between Europe and North America.” The summit will likely address escalating systemic threats to the rules-based international order, including shifting dynamics in NATO countries’ relations with China and Taiwan; increased Russian aggression; efforts to undermine democratic stability; and geopolitical competition in the Arctic, cyberspace, and outer space. NATO leaders will likely also discuss climate-related security threats.

Conference of the Treaty on the Nonproliferation of Nuclear Weapons, New York (August 1–26)

Postponed thrice due to the pandemic, the tenth Review Conference for the Treaty on the Nonproliferation of Nuclear Weapons (NPT), also known as RevCon, is tentatively scheduled for August. At the last RevCon, UN High Representative for Disarmament Affairs Izumi Nakamitsu called for this gathering to be a “circuit-breaker” [PDF] to interrupt the recent “surge of nuclear danger.” Though one of the most widely adopted treaties, the NPT is plagued by a disarmament deficit, with the five nuclear-armed states party to the treaty still failing to meet their disarmament commitments. As tensions between three of them—the United States, China, and Russia—continue to rise and pressures to modernize their nuclear arsenals mount, the likelihood of reducing this deficit is declining precipitously. However, a recent joint statement from these three nuclear powers, plus France and the United Kingdom, signals an awareness of what’s at stake if tensions spiral out of control. RevCon will also have to address concerns about escalating proliferation, especially in East Asia—on the Korean Peninsula and beyond—and exacerbated by the pace and uncertainty of negotiations to revive the Iran nuclear agreement.

The opening of the seventy-seventh session of the UN General Assembly (UNGA 77) will serve as a chance for countries to take stock of their progress in implementing last year’s pledges, including reducing vaccine inequity and accelerating credible climate action. UNGA 77 should also include an evaluation of Secretary-General Guterres’s Our Common Agenda report, which was launched just before UNGA 76. The report was both an assessment of the United Nations’ modern operating environment and a roadmap for how the organization can more effectively address the challenges of that environment. UNGA 77 will also be a critical moment for U.S. President Biden to address both foreign officials and domestic constituents. His speech at this year’s opening session could be an opportunity to sell the Democratic foreign policy agenda and highlight how collective action can help the country deliver on economic, humanitarian, and security goals ahead of the 2022 midterm elections.

Global economic recovery from the pandemic will be the top priority for Indonesia as president of the Group of Twenty (G20) this year. With the theme of “recovery together, recovery stronger,” Indonesia’s presidency will focus on three pillars: strengthening the global health architecture, accelerating sustainable energy transitions, and promoting digital transformations. Discussions will continue on ensuring equitable access to COVID-19 vaccines and securing global prosperity through reform efforts in areas including global taxation, anticorruption, infrastructure financing, and fairer world governance. Indonesian President Joko Widodo signaled his intent to advocate for the interests of archipelagic and small island nations as well as vulnerable groups. Indonesia’s first G20 presidency will face a litany of challenges: G20 members are increasingly polarized by geopolitical and geoeconomic tensions, particularly the U.S.-China rivalry. Even basic policy initiatives such as the establishment of global funds for health threats proved elusive at the Rome summit in 2021. Notably, continuing efforts to establish a framework for pandemic preparedness (which was agreed to at the gathering in Rome) appears to be absent from the agenda.

Conference of the Parties to the UN Framework Convention on Climate Change, Sharm el-Sheikh, Egypt (November 7–18)

The twenty-sixth Conference of the Parties (COP26) to the UN Framework Convention on Climate Change, held in Glasgow last year, served as the latest disappointment on climate efforts. Under the Glasgow Climate Pact, parties now have until the end of 2023 to align their 2030 targets with the goal of limiting warming to 2°C (preferably 1.5°C) above preindustrial levels. COP27 will thus be an opportunity to evaluate how faithfully parties are fulfilling that responsibility. COP27’s reorientation toward Africa is also noteworthy given developing countries’ eroding trust in developed countries. Last year, Egyptian President Abdel Fatah al-Sisi declared his country’s desire to host the summit “on behalf of the African continent” and mark COP27 as a “radical turning point in international climate efforts.” If recent history is any indication, the summit is unlikely to live up to expectations. With climate change posing ever greater threats on all continents, a “radical turning point” is exactly what the world needs.

Expectations for Cambodia’s chairmanship of the ten-member Association of Southeast Asian Nations (ASEAN) are low given increased COVID-19 outbreaks in the region, Chinese aggression, instability in Myanmar, and sour U.S.-China relations. ASEAN summits are customarily followed by a larger East Asia Summit, which includes the United States, China, and six other major powers. Cambodian Prime Minister Hun Sen said that the fortieth ASEAN summit, which is centered on “Addressing Challenges Together,” will aim to strengthen the group’s central role in the regional security and economic order and prioritize the implementation of COVID-19 recovery initiatives and trade agreements. The political and humanitarian crisis devastating Myanmar since last year’s coup will also be a top agenda item. Given Hun Sen’s previous obstruction of ASEAN proceedings and his close alignment with China, many experts believe that ASEAN’s already watered-down approach toward Myanmar will weaken further.