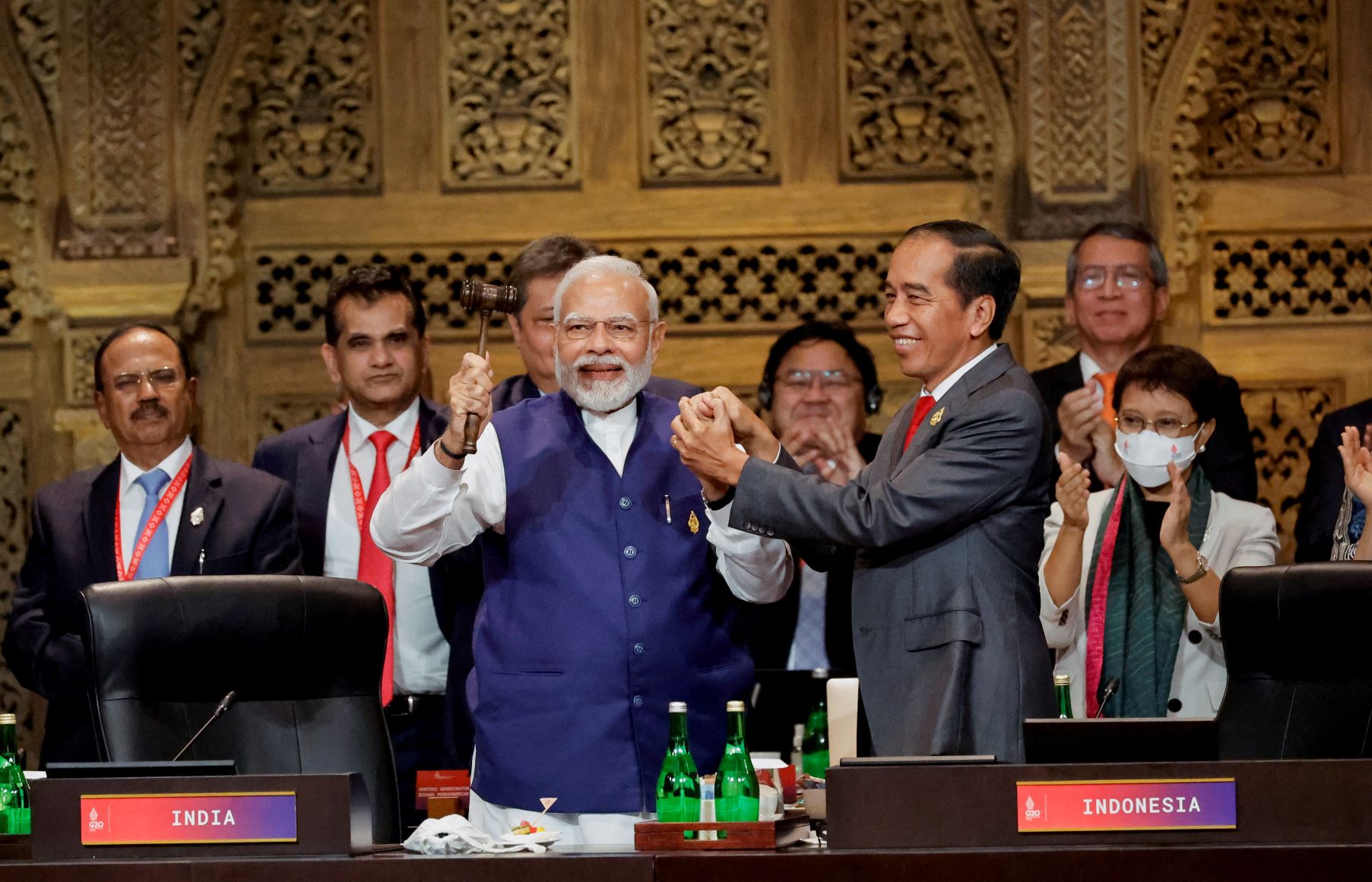 The world is enduring the most complex and interdependent set of challenges in recent memory, and global summits continue to play an indispensable role in driving and coordinating commitments to govern an unruly world. Even when summits are heavily scripted, they give leaders a rare opportunity for face-to-face discussions—something sorely missed during COVID-19—which can strengthen relationships and increase mutual understanding.

The Global South and middle powers have long been inadequately represented in decisions at the multilateral level. With countries outside of the West hosting some of the most important summits next year, it offers the rest of the world crucial opportunities to shape the multilateral agenda. Can the Global South and middle powers rise to the occasion, or will institutional and geopolitical impasses stifle multilateral action? Eight major summits in 2023 will help provide an answer. Here’s what to look for at each summit.

Climate change, biodiversity loss, and pollution have the world careening toward a global water crisis. The UN 2023 Water Conference offers a once in a generation opportunity to preserve this vital resource. While water is discussed at other multilateral environmental summits and most heads of state won't attend this conference, its importance should not be overlooked. It’s the first conference to gather UN members to focus exclusively on water since 1977, and it is sorely needed to integrate the fragmented management of water resources and set the politics and economics of water right. The conference will focus on the objectives laid out in UN Secretary-General António Guterres’s Water Action Decade, 2018–2028, and the linkages between water, health, sustainable development, climate resilience, and environmental cooperation. Over 730 million people live in countries with high and critical water stress—with developing countries the most affected by shortages, flooding, and water quality—and a growing population will only put more stress on the system.

Japanese Prime Minister Fumio Kishida’s decision to host the Group of Seven (G7) leaders in Hiroshima, which was devastated by the first atomic bomb dropped in the Second World War, clearly demonstrates his commitment to nuclear disarmament. Kishida hopes that the location will help deepen discussions on achieving a peaceful world without nuclear weapons, but the three G7 states with nuclear weapons will probably frustrate his efforts. Japan also will likely use its G7 presidency to coordinate pressure on Russia to halt its war in Ukraine, promote energy security, and maintain the rules-based global order. Creating global data flow standards and implementation of the price cap on Russian crude oil will also be a focus of discussion. In an effort to counter China’s Belt and Road Initiative, G7 members will try to further mobilize funds for the Partnership for Global Infrastructure and Investment, and seek to replicate agreements like the recent energy transition partnership with Indonesia.

It was only three years ago that French President Emmanuel Macron called the North Atlantic Treaty Organization (NATO) “brain-dead.” Russia’s invasion of Ukraine has revitalized the organization. Secretary-General Jens Stoltenberg says that the meeting will be an opportunity for the alliance “to agree further steps to strengthen our deterrence and defense,” and “continue our support for Ukraine.”  He also called for reviewing increases in defense spending, with only nine of thirty members projected to meet the 2 percent spending target in 2022. NATO members will also further discuss implementing a new strategic concept, which not only aims to reinforce battlegroups and strengthen readiness forces, but also addresses the challenges stemming from China. Some members will no doubt raise concerns about how long the Ukraine war will last and the potentially confrontational trajectory the new strategic concept puts NATO on vis-à-vis China.

Although Ukraine will not join NATO anytime soon, Secretary-General Stoltenberg and first-time summit host Lithuania will continue to work to welcome Finland and Sweden as full members. Stoltenberg’s successor should also be announced by July, after his term was extended for another year in 2022.

Prime Minister Narendra Modi has chosen “One Earth, One Family, One Future” as the theme of India’s Group of Twenty (G20) presidency, highlighting the interconnectedness between human life and the environment. India will focus its presidency on the world’s top challenges: climate change, terrorism, and pandemics. Other priorities will carry over from previous G20 presidencies, such as global health, digital infrastructure, energy security, anti-corruption, and women’s empowerment. India will have its hands full uniting a divided G20, but its traditional pursuit of strategic autonomy and role as a bridge between East and West could help it repeat Indonesia’s unexpectedly productive G20 summit again this year. As the second of four consecutive Global South hosts of the preeminent global governance club, India will continue to push for better Global South representation in multilateral institutions. To this end, the African Union could be made a permanent G20 member at the summit after receiving U.S. President Joe Biden’s support.

Russia’s invasion of Ukraine dominated UN diplomacy this year, and will be at the top of the agenda at the seventy-eighth session of the UN General Assembly (UNGA78). The annual gathering is a chance for the world to assess the Ukraine war’s effect on multilateral diplomacy, which the International Crisis Group’s Richard Gowan argues has shown unexpected resilience in 2022. However, the focus on Ukraine overshadows the escalating violence and political turmoil elsewhere in the world. UNGA78 will also feature several high-level events. One on universal health care will work to secure meaningful commitments to get the progress made toward universal health coverage over the past two decades back on track after COVID-19 setbacks. Another will mark the midpoint in the implementation of the 2030 Agenda for Sustainable Development, which a recent UN report says is in “grave danger.” UN Secretary-General Guterres’s upcoming report on a “New Agenda for Peace” will be another topic of discussion. The report will help lay the groundwork for debate on a set of potentially broad UN collective security reforms for the 2024 Summit for the Future.

The twenty-eighth session of the Conference of Parties (COP) to the United Nations Framework Convention on Climate Change (UNFCCC) will be held in the Middle East for the second straight year. It will follow what many say was a mixed COP27 in Egypt. After more than a decade of negotiations, almost two hundred nations agreed to create a fund to compensate vulnerable countries coping with climate disasters. Negotiators will spend the next year determining the details of the “loss and damage” fund, including the funding sources. While the breakthrough was notable, the failure of COP27 to make progress on accelerating emissions-cutting efforts or phasing out fossil fuels only heightens pressure on negotiators at COP28 to secure meaningful new action. Unfortunately, hopes of phasing out all fossil fuels will again most likely face roadblocks, as the host United Arab Emirates—one of the world’s biggest oil producers—has made clear it sees a continued role for oil and gas.

Economics, rather than geopolitics, will drive the agenda of Indonesia’s chairmanship of the Association of Southeast Asian Nations (ASEAN) this year, adopting the theme “ASEAN Matters: Epicentrum of Growth.” While escalating U.S.-China tensions, divisions over the Myanmar coup, and internal dysfunction have impaired ASEAN’s ability to find consensus, a successful Indonesian G20 presidency will generate momentum for Indonesian President Joko Widodo, who is commonly known as Jokowi.

As the largest and most influential member of ASEAN, Indonesia is uniquely positioned to push its agenda on growth, inclusivity, and economic sustainability forward. Many expect more progressive initiatives in ASEAN under Indonesia’s leadership compared to Cambodia’s 2022 presidency. President Jokowi is expected to push for more action against Myanmar’s junta leader, possibly temporarily suspending Myanmar’s ASEAN membership or inviting representatives of ousted leader Aung San Suu Kyi. Jokowi might also call for a review of ASEAN’s charter or push for more structural changes. ASEAN will have a chance to discuss accelerating practical and concrete cooperation with its broader dialogue partners at the larger East Asia Summit— which includes the United States, China, and six other major powers—immediately following the ASEAN summit. They’ll discuss implementing the ASEAN Outlook on the Indo-Pacific, ASEAN Maritime Outlook, and High-Level Task Force for the ASEAN Post-2025 Vision.

As these eight summits suggest, the global agenda is daunting. The cordial and constructive meeting of U.S. President Joe Biden and Chinese President Xi Jinping in November 2022 gives hope that Washington and Beijing will be able to strategically compete while also cooperating on shared challenges. The Global South and middle powers will seek to weather the U.S.-China competition and navigate the narrowing strategic space to drive global summits to deliver on their promises in 2023.