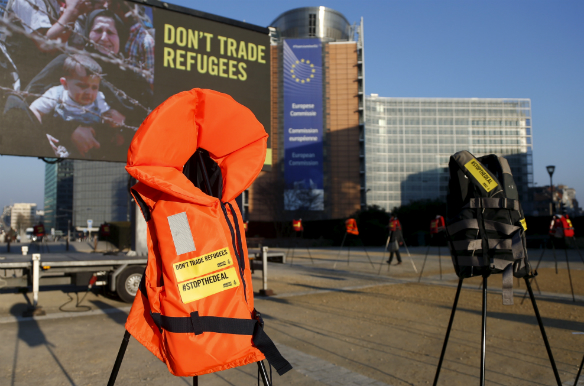 Over the past year, European Union leaders have spent countless hours devising plans to address the unprecedented migrant and refugee crisis that has seen more than one million people cross into Europe. However, their halting, scattered response has undermined effective policy implementation and squandered goodwill and resources. The bloc's obligatory relocation scheme, adopted in September 2015, now lies in tatters: only 1,100 of the planned 160,000 refugees have been relocated from Italy and Greece as of April 2016.

The March 2016 agreement between the twenty-eight EU member states and Turkey on migration, therefore, represents a potential turning point for Europe. On paper, the agreement attempts to course-correct the ineffective approach that has characterized the EU’s response to date by developing a more comprehensive program that includes Turkey, the intermediate source of many of the refugees pouring into the EU. But the success of the EU-Turkey deal ultimately hinges on implementation amid myriad political, ethical, legal, and logistical challenges. For the EU, the agreement represents a crucial test of its commitment to human rights in the face of the greatest refugee crisis since World War II. For Turkey, the challenge lies in its ability to implement a substantial package of reforms that would draw it closer to the EU and better enable it to develop a long-term, multilateral humanitarian crisis management system.

Borne out of frustration with previous attempts to manage growing migrant flows into Europe, the EU-Turkey agreement was drawn up by Germany and the Netherlands, and negotiated directly between German Chancellor Angela Merkel and Turkish President Recep Tayyip Erdoğan. For Germany, the deal was seen as a last-ditch attempt to regain control of an escalating situation that saw more than a million migrants entering the EU’s member states by sea in 2015 alone. At the same time, it was meant to protect the bloc’s liberal values against the rise of xenophobia and anti-immigrant sentiments by allowing the safe and legal passage of a limited number of legal migrants into Europe. On the Turkish front, Ankara had long been calling for sharing the financial and logistical burden associated with having become the host or transit country of the greatest number of Syrian (and Iraqi) refugees who are displaced in the region and, according to the UNHCR Asylum Trends midterm report for 2015, the largest recipient of individual asylum seekers in the world.

Against this backdrop, the deal struck between the EU’s twenty-eight member states and Turkey during the European Council meeting on March 17-18, 2016 stipulated:

a)     the return of all "new irregular migrants" to Turkey (i.e., those who arrived from Turkey to Greece after March 20)

b)     the establishment of a "one-for-one" resettlement scheme based on the "one in, one out" principle, whereby for every Syrian returned to Turkey, the EU will allow another Syrian refugee to enter the EU legally.

In exchange for Ankara’s cooperation, the EU has offered both political and financial concessions. These include:

a)     the resumption of long-stalled EU-Turkish accession talks,

b)     the revamp and acceleration of the visa liberalization process for Turkish citizens looking to travel to Europe's Schengen zone, an area that currently comprises twenty-six European countries without border controls,

c)      a pledge of 3 billion euro of additional funding for the Facility for Refugees in Turkey through 2018, in addition to the equivalent sum that had already been pledged during the EU-Turkey Summit in November 2015 to cover the costs associated with health, education, humanitarian, and infrastructure projects for Syrian refugees hosted in Turkey.

A Deal Cloaked in Controversy

The agreement is ambitious as it is controversial, and has come under fire from politicians across the spectrum. Leaders like Hungary's Prime Minister Viktor Orbàn and representatives of right-wing political factions throughout Europe have rejected any resettlement scheme, as well as the acceleration of the EU-Turkey visa liberalization process. Bulgaria has voiced its fear of becoming the new transit country, and Italy has echoed this sentiment with an even greater concern of seeing the Balkan route being diverted through Albania and the Adriatic, in addition to a new surge in the Central Mediterranean route through Libya for Syrians.

Human rights and humanitarian organizations like Amnesty International and the UN refugee agency have criticized the EU’s attempt to outsource the burden of refugee reception and protection to Turkey. In particular, they doubt whether Turkey is a safe third country along the lines of the criteria mentioned in article 38 of the new 2015 Asylum Procedures Directive that contains the principles and procedures to be respected when dealing with potential refugees, including the principle of non-refoulement. Many human rights activists have voiced concerns about the fate of Syrian-Kurdish refugees in case they are returned to Turkey without policies articulating safeguards in the host country.

Another concern lies in the fact that Ankara does not apply the 1951 Geneva Convention—the key legal document in defining who is a refugee, his or her rights, and the legal obligations of states, including the one of nondiscrimination—to non-Europeans, and its asylum and reception system still has many gaps in coverage. Despite a number of significant improvements with the new Law on Foreigners and International Protection, in force since April 2014, and the new Temporary Protection Regulation that came into effect in October 2014, including the possibility for Syrian refugees to acquire work permits in certain sectors of the formal economy and a more decentralized approach to the management of refugee issues, Ankara still needs to devise a long-term plan that properly recognizes the displaced as refugees, not guests, given the fact that they are expected to remain in Turkey for the long term.

These challenges notwithstanding, the strength of the deal hinges on practical implementation. While the agreement has been welcomed as a positive step in the EU member states’ attempt to forge a common approach to the migrant crisis, it also places a disproportionate burden on Greece’s shoulders, while relieving other countries from the need to confront a pan-European, if not global, crisis.

Greece faces a “Herculean task,” according to European Commission President Jean-Claude Juncker. The country's asylum system, in tatters after more than five years of austerity-led reforms, is unable to process asylum applications in a way that would facilitate the swift return of irregular migrants to Turkey. Prior to the deal, it could process at most 1,500 applications a month, a figure that, when confronted with the rate of arrivals from Turkey during the first three months of 2016 (some 230,000 people), and even anticipating a marked reduction in the numbers following the deal, points to the fact that Athens would require many years to manage the current scale of the problem. The Greek authorities are thus under pressure to build up the country’s administrative capacity with the associated costs hovering around 300 million euro in the first six months of 2016 alone, some of which is covered by the EU common budget.

There are doubts as to whether Ankara will be willing, let along technically able, to substantially improve its asylum system to meet its legal and humanitarian obligations under the deal to offer an adequate level of protection to people in need. Among the seventy-two requirements that Turkey must meet to be granted visa liberalization by the EU, only thirty-seven have been so far honored by the Turkish government. A number of the remaining points directly relate to the country’s asylum system, including benchmarks targeting irregular migration.

The chance to speed up this process together with the (largely symbolic) opening of Chapter 33 on financial and budgetary provisions before the end of June 2016, one of the five negotiating chapters Ankara had asked to (re)open in EU accession negotiations, presents a ripe political opportunity for the Turkish leadership to sell this deal to its public. The timing of the deal is also crucial as Turkey is set to host the first World Humanitarian Summit in May 2016.

According to the first report on the implementation of the agreement released by the European Commission on April 20, 2016, only 325 irregular migrants that arrived to Greece via Turkey after March 20 have been returned to Turkey and 103 Syrian refugees have been resettled in the EU under the one-for-one resettlement scheme, meaning that implementation still largely lies ahead. In a similar vein, the Home Affairs meeting of the European Council held on April 21, 2016, further stressed the need to speed up the implementation of the EU-Turkey agreement and in particular the resettlement of Syrian refugees from Turkey. In parallel, the ministers have reaffirmed the priority to protect the security of the EU’s external borders, stem irregular flows, and safeguard the integrity of the Schengen area.

The EU-Turkey deal is a pragmatic response that however fails to adequately balance security with solidarity. It is true that the agreement might send a (positive) message to the Syrians who are desperately trying to reach Europe that asylum there will not be beyond their reach, by setting up the resettlement scheme. However, as some EU countries feared this plan would be open-ended, a resettlement cap has been placed at only 72,000, and the scheme is once again premised on the voluntary readiness of the EU’s member states. Similarly, the loud call to the EU’s capitals to increase the number of relocations to six thousand per month seems pure rhetoric in light of the dismally low number of successful relocations to date.

All this dithering by the member states when it comes to a much more robust commitment to welcoming refugees does not bode well for the so-called voluntary humanitarian admission scheme the deal itself envisages once the "temporary and extraordinary measure," i.e., the one-for-one resettlement scheme, is terminated. A truly ambitious and potentially game-changing humanitarian long-term initiative would have to complement instead of following the one-for-one scheme, by providing around half a million people or more with the opportunity to resettle directly to the EU’s member states not only from Turkey but also from Lebanon and Jordan, which currently host more than one million and six hundred thousand Syrian refugees, respectively. In order to be successful, this initiative should be accompanied by the development of a common European asylum policy worthy of its name and by the creation of permanent channels of legal migration to the EU. This is the only way to offer a credible alternative to the irregular migration routes, and their attendant risks, taken by people fleeing conflicts and violence as well as to move in the direction of a more moral, sustainable and at the same time secure refugee policy.