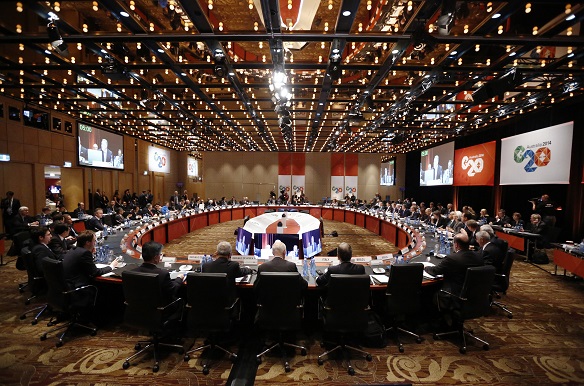 It is important that the Brisbane G20 Summit on Nov. 15–16 is a success. In an increasingly integrated global economy, effective forums for economic cooperation are needed.

The 2008 global financial crisis was the catalyst for the G20 becoming a leaders'-level forum. The Washington, London, and Pittsburgh summits helped save the world from an even more severe economic crisis. But while the G20 has achieved much and better reflects the changing nature of the global economy compared with the G7, a view has developed that the best days of the G20 are behind it. The spirit of cooperation demonstrated in the G20's response to the global financial crisis weakened as the immediacy of the crisis faded. Its agenda has become long and unfocused. Most importantly, the G20 has lost its inherent strength: the direct involvement of leaders in seeking to achieve meaningful outcomes.

There are high expectations that Australia's G20 presidency, which concludes at the end of 2014, will help reenergize the forum. The ingredients for a successful summit will include achieving significant progress on a few key outcomes that demonstrate clear evidence of cooperation and an emphasis on follow-through and the implementation of commitments. The following identifies the key outcomes in each of the work streams Australia has pursued that would define the Brisbane summit as a success:

G20 countries have committed to present policy measures at the Brisbane summit that will lift global growth by an additional 2 percent over five years. The response so far has been encouraging. The International Monetary Fund (IMF) and Organization for Economic Cooperation and Development (OECD) have estimated that policies countries have submitted to date will, if implemented, increase global growth by 1.8 percent over five years. This target has, however, been criticized as a long-range commitment that will be forgotten. The credibility of the Brisbane summit outcomes will be strengthened if there is detail on how these policy commitments will be implemented and how progress will be monitored and measured. The IMF and OECD should be asked to provide regular reports on each country's progress in implementing its reforms, along with an assessment as to whether the G20 is on track to meet the growth target and if not, what action is required. A date should be set in 2015 for the first implementation report, which should be published and discussed at next year's G20 finance ministers' meetings and leaders' summit.

Increased infrastructure investment, particularly through increased private-sector financing, is a priority for the G20 in 2014. Countries should outline in their growth strategies the steps they are taking to improve their domestic investment environment. Reforms should be benchmarked against recommendations by the international organizations. The focus should not only be on the quantity of new infrastructure investment, but the quality of that investment. For example, building 'bridges to nowhere' will not support long-term economic growth. The main priority is to select the 'right' infrastructure projects, those that provide the highest net social benefits. The G20 should commit to full transparency of the selection and assessment process, including the cost-benefit analysis, of all infrastructure investments.

Increased global trade will be required for the G20 to achieve its growth target. But the future of the multilateral trading system and the World Trade Organization (WTO) is in doubt. The G20 needs to restore confidence in the system. A significant outcome would be for G20 members to commit to roll back all protectionist measures, including non-tariff measures, introduced after the global economic crisis. There should also be a commitment to the rapid implementation of the Agreement on Trade Facilitation, without waiting for formal ratification through the WTO. The Brisbane summit will have to address the future of the Doha Round. The G20 should support the WTO developing a package of measures that would conclude the Doha Round. Leaders should also outline that the future direction of the multilateral trading system and the WTO will center around the expansion and governance of global value chains.

Combating tax evasion and avoidance is a G20 priority. A particular focus is to end bank secrecy and deal with base erosion and profit shifting (BEPS), where globally operating firms shift profits to low- or no-tax jurisdictions. Toward ending bank secrecy, all G20 countries should, by the Brisbane summit, commit to adopt the automatic exchange of tax information. The OECD has presented its first installment of reports on combating BEPS. This remains a work in progress and political momentum must be maintained, particularly with implementation. Leaders could demonstrate in Brisbane that they are acting on combating BEPS by agreeing that they will adopt country-by-country reporting of transfer pricing as quickly as possible.

The Brisbane summit should also launch permanent changes to the arrangements for dealing with international tax issues. This should include formalizing the participation of non-OECD G20 members (such as China, India, Brazil, and South Africa) beyond the current BEPS initiative timetable and agreeing on mechanisms to more actively and directly involve developing countries in the negotiations. International tax issues can no longer be a largely OECD-centric issue. The task is not only to modernize international tax laws, but also the forum through which they are developed.

The G20 provides important political backing for efforts to strengthen financial standards and regulation. The completion of the design phase of many of the reforms that were initiated in response to the global financial crisis is a significant achievement. But the implementation of the reforms will run over many years. The task of responding to a rapidly changing financial sector is an ongoing one. Standards will have to be constantly reviewed and any unintended implications identified and corrected.

The G20 should focus on strengthening the governance and operations of the Financial Stability Board (FSB). It should support the FSB's efforts to improve country representation, as well as improve the way the FSB approaches its work. High-level guiding principles should be established for the development and review of financial standards.

In 2010, the G20 agreed to reform IMF quota and governance arrangements. These remain blocked by the U.S. Congress (the United States, with the largest IMF quota, has veto power over such reforms). The G20 should continue to press the U.S. Congress to pass the reforms. But the G20 should also seek ways to work around the blockage in Congress. At the Brisbane summit, leaders should commit to specific steps that ensure that the failure to advance the governance reforms does not affect the operations of the IMF. In particular, G20 leaders should ensure that access to the Fund's resources and its surveillance is even-handed and not biased toward any group of countries.

G20 members need to be concerned not just with their own economic prospects, but also with the implications of their policies on nonmembers, particularly developing countries. While there has been progress on some issues, the G20's development agenda has been criticized as being too diffuse and largely an 'add-on'.

A significant outcome of the Brisbane summit would be the mainstreaming of development issues. For example, a more coherent G20 growth narrative must take into account how the economic advancement of developing economies contributes to stronger global growth. The infrastructure needs of developing countries must be recognized and they should receive the financial and technical capacity so that they can benefit from increased international trade. The G20's work on tax evasion and avoidance is of vital concern to developing countries. They must be part of the process and their capacity constraints in combating tax evasion must be addressed.

Boosting labor market participation is an important component in achieving an increase in economic growth. There cannot be a 'one-size-fits-all' solution for increasing participation across groups as diverse as women, youth, and disabled workers. Policy solutions will need to reflect this diversity, while providing incentives, removing impediments, and enhancing the capacity of the most vulnerable to gain employment. Country employment plans should also cover measures to increase education and skills. Facilitating the mutual recognition of qualifications should also be pursued, first within G20 states but eventually this should be sought as a global aim. A good outcome from the Brisbane summit would be to see these aspects covered, as appropriate, in each country's growth strategy.

Fighting corruption has been an ongoing objective of the G20. The Brisbane summit will see the establishment of a new G20 Anti-Corruption Action Plan for 2015–16. The aim should be for the G20 to add distinctive value to the existing anti-corruption efforts of multilateral institutions, such as the OECD and UN. A significant outcome of the Brisbane summit would be for the G20 to adopt principles aimed at cracking down on the misuse of company structures to avoid detection, particularly through the introduction of enhanced transparency requirements for beneficial ownership of companies, such as through public registers.

The G20 should continue to focus on improving transparency in energy markets, particularly gas markets, promoting energy efficiency, and removing inefficient fossil fuel subsidies. A significant outcome from the Brisbane summit would be recognition of the need for a forum to deal with global energy challenges and bring together the major energy consumers and producers. Existing global energy governance arrangements are fragmented and do not reflect changes in energy markets, particularly the growing role played by emerging markets.

More from the Council of Councils
A Region Divided: What Did the Summit of the Americas Accomplish?
Russia’s Invasion of Ukraine Will Have Lasting Implications
COVID-19 After Two Years: The Failure of Pandemic Governance
Drag